The seasons are changing so it’s time for winterization 101. Beekeeping is all about understanding rhythm of the season and how it applies to the rhythm and timing of a beehives’ development. A beehive will grow starting in February and recede in to September when managed in the Prairies, following a strong bell curve. This bell curve of normal development should guide your management, even as you head in to the winter months.

Beehive activity decreases throughout the cold winter months from October-February. The weather will keep you from opening or managing your colonies through these months. This is why it is imperative that you manipulate and organize your hives in an effective way. This ensures that the bees are best able to access their food stores, regulate hive temperature, ventilate moisture from the colony, and allow periodic cleansing flights.

Many beekeepers fear that they are queenless at the point of hive recession. WAIT! Look for queen cells or find some eggs. Even a few before you think about introducing another queen. If you don’t see queen cells, but you can find a couple of eggs. You’re in the clear. You’re queenright.

In the late fall, your brood nest will naturally recede as the night-time temperatures begin to drop below 10 degrees and daylight hours decrease in to the equinox. You may find that in a few weeks, that your brood nest can decrease by half.

As the brood nest compresses, there will be empty combs found throughout the brood nest. The bees will start to back fill these cells with pollen as the colony moves in to the years final flow of pollen and nectar, the Fall Flow.

When compressing the beehive, it is essential that all of the brood is compressed in to the bottom middle of the beehive. If you have more brood than space in your bottom box (9 or 10 frames), wait a week or so to compress the brood and allow your colony to naturally recede.

According to the CAPA Bee-Beaverlodge Research Centre, honey bee colonies require 65-85lbs of honey to survive the prairie winter. A frame of honey weighs an average of 7lbs. So stores of 8-9 frames of honey is required

Compressing from multiple boxes in to a double can be overwhelming, especially if you have more than three boxes. Here is a step-by-step strategy on how to compress your beehives and harvest capped honey simultaneously.

COMPRESSING IN TO A DOUBLE

Do a final check on your bees before you wrap them for the winter. Ensure that they have not exhausted honey stores beyond your preparation and that the colony is in good condition.

A single is a single standard Langstroth box filled with 9 or 10 frames depending on preference. Overwintering single brood boxes is a common practice in cold climates and has success if done correctly. It is imperative that single overwintered colonies are jammed with honey stores or dry feed.

This is to ensure that a larger cluster does not starve. In order to ensure that a colony has enough stores, compression of the beehive takes place in two rounds. The initial compression, moving a multiple boxed hive in to a double, with brood compressed to the bottom box and the second box above filled with honey. Then, about a month later after the first hard frost, a second compression event must take place. Here are the actions to be taken.

COMPRESSING IN TO A SINGLE

Top box is placed above an upside down telescoping lid crossways, to allow it to be suspended. Any bees that fall out of the box will land in to the inside of the lid.

If concerned for hive vitality or stores, add a pollen patty or dry feed. If liquid feeding, read Feeding Your Bees: Risks and Benefits

Top Bar Hives (TBH) come in various sizes and lengths. Whether you have a narrow side entrance or a long side entrance, the principals are the same: consolidate brood, consolidate honey. In our apiary, our TBH’s have duplicate supers mirrored above with a supering lid allowing for bee movement between cavities. It also ensures that the equipment used within the colony is consistent.

If your TBH colony is in a double, it will have to be compressed in to a single TBH for winter. This ensures easy movement of the bees throughout the long cavity, and decreases the loss of heat through the top box. If your TBH colony is a long single, then you will need to inspect and consolidate the brood nest and honey stores.

TBH’s with long side entrances are at a higher risk of starvation in the winter months if honey is not consolidated. This is because a beehive will organize its brood rearing location nearest to the entrance for temperature regulation. A long side entrance will cause honey stores to be split at both ends. When winter arrives, the colony will move to one side toward honey stores, and will be unable to move to the opposite side of the cavity once rations at their location become sparse. This can cause starvation with an excess of honey stores within the colony. If its more than a couple empty combs away, the bees struggle to move through that space as the honey is not there to work as a thermal regulator, absorbing heat from the bees and emitting it back to them when temperatures drop.

THIS IS WHY CONSOLIDATING HONEY IS SO IMPORTANT IN ALL BEEHIVES. THE EASIER IT IS FOR BEES TO ACCESS WINTER STORES, THE GREATER THEIR DEFENCE AGAINST STARVATION.

Top bar beehives are a fun and unique method of beekeeping. It encourages natural comb development, decreases in the physical weight the beekeeper is responsible for liftings, and honey harvesting does not require much more than the appliances found in a home. When managing bees, care and consideration for the colony heading in to winter must be taken in to account, no matter what hive body you select. Here are some general recommendations for all TBH’s headed toward a prairie winter.

Thermodynamics and Beehives in Winter

When considering wintering your beehives, you need to have a clear understanding of heat, moisture, and air flow; in essence, thermodynamics. Here are a few rules of thermodynamics to keep in mind:

less dense air up, creating a vacuum below, that is filled by the heated air from above, creating a cyclic movement of air. The smaller the amount of space, the easier the environment is capable of reaching homeostasis of temperature, and convections cease to take place.

So, what does this all mean?
This means that ventilation and insulation are key components to a successful winterization of a beehive.

MOISTURE IN A BEEHIVE

For every 40lb of honey that are consumed by a honey bee colony, 1 gallon of water is produced and released by the beehive. Honey bees are in constant moisture management because of a cluster’s respiration activity and the release and evaporation of excess water in the uncapped honey cells. Ventilation in a beehive is essential to allow the bees to use the heat they produce. Ventilation also allows for wing activity to force moist convection currents to force the air out of the hive through a top entrance, or to condense on the lower parts of the colony where the cool air settles.

Without proper ventilation within a beehive, mould will form on the combs as well as the colony’s mortality can occur.

WET BEES ARE DEAD BEES SO ALLOWING ACCESS TO OPEN AIR FOR FLIGHT AND AIR CIRCULATION IS KEY.

A top entrance for bees is key, as well as sufficient roof insulation. Heat will leave the hive as it rises too quickly, and the colony will exhaust its self and resources in an effort to reach a consistent mean temperature throughout the winter months without an insulated roof.

A colony of bees consumes the least amount of honey stores when maintaining an internal temperature between 5-7C. When the hive temperature is lower, the colony must consume more resources in an effort to heat the hive. And warmer encourages bee activity and breaking cluster. When the external weather is warm enough, bees break cluster they can go on cleansing flights. This increases food consumption as well. The bottom board and the space above the cluster needs to be properly insulated. A well insulated cavity allows for greater heat regulation.

The ability for cool air to pool in the bottom box can be both an asset and hindrance when wintering double Langstroth colonies, If the bottom board or the lid of the hive is poorly insulated, the cool air will continually pull energy-heat from the cluster as well as collect moisture and mould. Heat always moves from hot to cold. By insulating the bottom and top of the beehive, you allow for the colony to have a greater control over these concerns by having greater control of the convection currents and the size of the radiant heat pocket surrounding the cluster.

Condensation can develop above the cluster without proper ventilation or moisture absorption within the hive. Unfortunately, wet bees are dead bees.

Beekeep your best with courses from ABC Bees 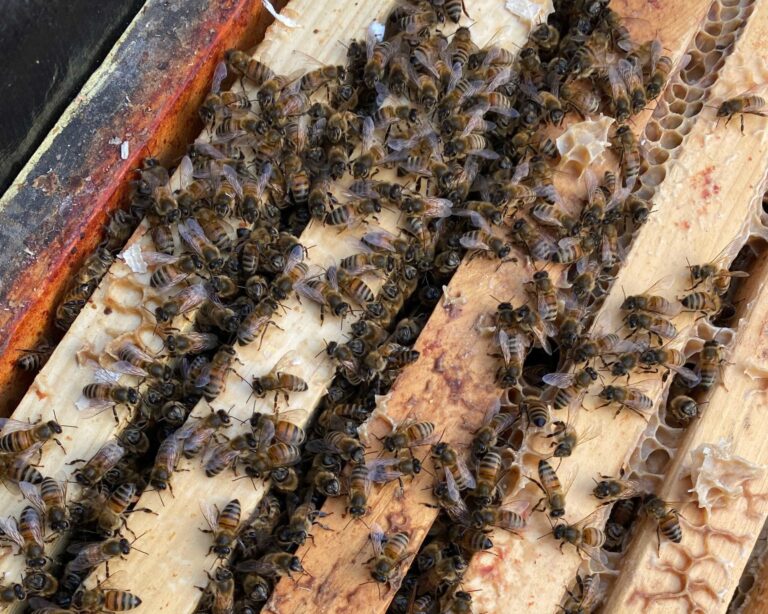 Spring hive Inspections: What to look for 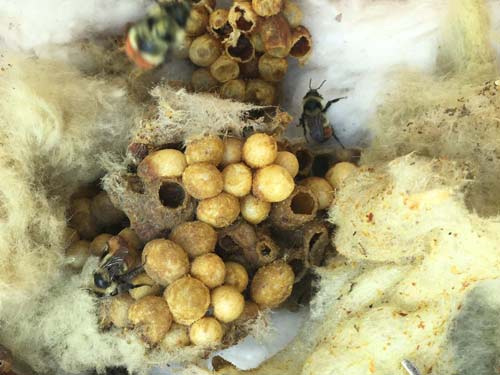 Bumble Bees: Lifecycle, Nests, and What You Can do to Help