At this time of year, it’s likely that your bees are basking in the glory of a major summer nectar flow, working hard to build up those honey stores for the winter and a little for sharing. However, there is someone else who is enjoying the bounties of summer as well, the Varroa mite. The Varroa destructor is a parasitic mite that feeds on the blood of bees, and spreading viruses throughout the colony. The mite looks like a reddish-brown crab and is about 2mm in size, quite large for a bee. It would be similar to having a grapefruit-sized parasite on your body!

Varroa mite lifecycle is strongly linked to drone lifecycle. This is why Varroa mites flourish in the summer when drone brood production is at its peak. The female mites prefer the more spacious cells and longer maturation time of drone brood, laying their eggs in the bottom of the cell so the newly hatched mites can feed on the blood of the drone larvae. Despite their size, Varroa can be tricky to spot and by the time you’re seeing them it’s likely that you have significant levels.

Summer is a critical time for monitoring mite levels. As mite levels are reaching their peak as the brood nest is declining. This means there are fewer bees able to actively remove mites, and the colony can quickly become overwhelmed. It can almost be guaranteed that a honeybee colony will have varroa mites. The goal is to determine the levels of mites and ensure that it is not beyond what the bees can cope with.

There are a few ways fairly easy ways to determine mite levels in your hive.

This is the best way to sample entire colony. Cover a white piece of heavy white card stock with Vaseline and slide into the hive on top of the bottom board. As mites fall or are removed from bees they will stick to the board. Leave board in hive for 24 hours, remove and count number of mites. More than 8 indicates that mite levels are beyond the normal threshold. Ideally a beekeeper will take 24 hour samples once a week for 3 weeks to get a reasonable average.

Collect approximately 300 adult bees from the brood chamber into a mason jar (¾” of bees in a one litre/quart jar). Cover the lid with a 1/8” mesh and sprinkle a heaping tsp of powdered sugar over the bees. Roll the jar a few times until the bees are covered and then let it sit for a minute…the mites will begin to drop off the bees. Then shake the mites and sugar out over a white surface, out of the wind, for at least a minute and until mites stop falling out. The threshold for mite levels using this method is 8. Bees can then be returned to the hive.

If mite levels are high, action should be taken immediately to lower levels. Even if your mite levels are low, it is important to keep an eye on the situation so that you don’t discover a mite population boom in September going into winter.

If you want to learn more about varroa mites, check out the following work by Dr. Samuel Ramsey:

Beekeep your best with courses from ABC Bees 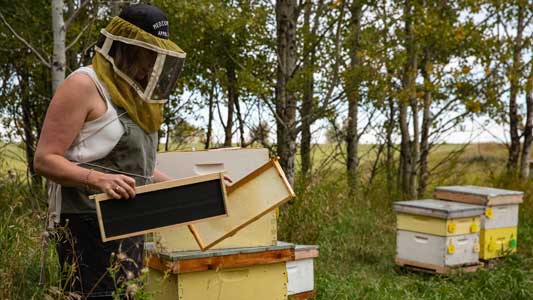 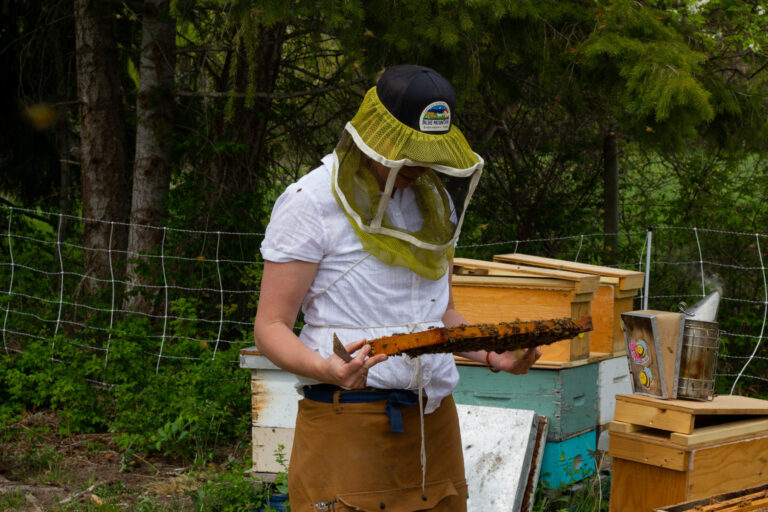 How to Make Splits in place Using the Topping Method